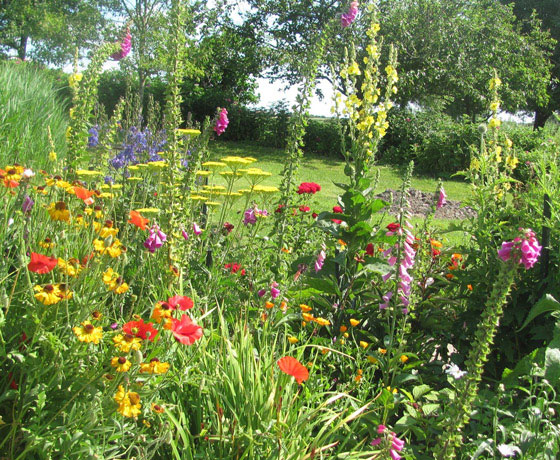 During a visit to Nolde’s Garden you are immersed in an incomparable sea of colour which blossoms in a different colour for every season. The height of summer, from mid-July until mid-August, is the most intense blooming period, and displays the greatest variety of forms.
The historic garden consists of around 500 perennials, some of which are very old. Between the perennials are various annual and biannual summer flowers. The best-known perennials found in the Nolde Garden are the oriental poppy, delphinium, iris, primrose, peony and lupine.
The tree population in the garden is also noteworthy. The woody plants that are domestic and location-typical such as poplar, willow, hawthorn and mirabelle were put in by Nolde not only as striking design elements, but also to maintain and promote the garden’s micro-climate. They serve, depending on their height and location, as windbreaks or to provide shade, and therefore are an important part of the hydrological balance system.
Among the many crop-trees – such as pear, plum, quince and mirabelle – there also thrives the rare apple variety “Agathe von Klanxbüll”, and the variety that can only be found here “Renette von Seebüll”. In Seebüll Emil Nolde created a garden that is an artwork, a little piece of carefully-designed nature, which in the midst of North Frisia’s marshy landscape, resembles a grand painting. 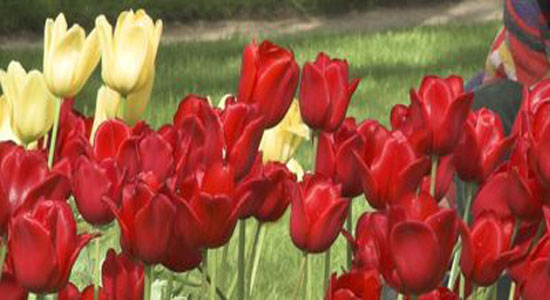 that blooms in April?

In April: Thousands of Tulips

For Easter, the Nolde Garden blazes with red: Almost 3,000 tulips of the “Ile de France” variety stand on the embankment trellises, lifting their stately blooms into the spring air. This spectacle compensates for the labour-intensive care these ramparts require from the Nolde Foundation Seebüll’s team of gardeners. The marshland’s heavy rains wash the earth away from the ramparts again and again, and the sun, always getting warmer, dries out the embankments’ raised slopes all too easily.
When the new shoots of the growing tulips are just peeping out of the soil, by the way, some visitors guess that they are asparagus or potato plants. However, Nolde’s vegetable plot lies beyond the flower garden, facing south.