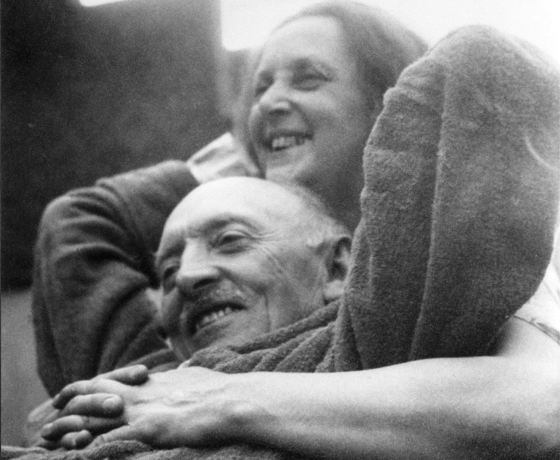 Even early on Emil Nolde was moved by the thought of finding a permanent home for his work: “an independent, free foundation”, that was to be opened to the public. To achieve this, after the residential and studio house in Seebüll was completed in 1946, he and his wife founded the Ada and Emil Nolde Foundation Seebüll.

In the preamble Nolde wrote: ” … in our little estate in pastorally simple nature – figuratively speaking – the seeking, spiritual wanderer from every country should find a special place where he can be given a little happiness and artistic-spiritual relaxation.”
The Nolde Foundation Seebüll has the task of managing Emil Nolde’s extensive estate in Seebüll in accordance with the artist’s sensibilities, preserving his work for posterity, and circulating it worldwide.

Due to the collection’s wealth of paintings, watercolours, “unpainted pictures”, drawings, prints and handicrafts, the Foundation is able to put on annually changing exhibitions in Seebüll. Furthermore, together with important museums both in Germany and abroad, the foundation puts on larger exhibitions and makes loans available for exhibit in various other presentations.

The Ada and Emil Nolde Foundation Seebüll has been in existence for sixty years as of June 12, 2016.

With more than 60,000 visitors annually, this private foundation on the German-Danish border can look back on more than 60 years of successful operation. So far a total of more than 4.2 million people have visited the museum with its annually changing exhibitions, to experience the Gesamtkunstwerk created by Ada and Emil Nolde. The foundation supports and organizes highly respected exhibitions worldwide, and has produced a great many publications on the life and work of Emil Nolde.

In the past, however, there have also been miscalculations. The creation of mythologies was promoted without sufficiently portraying the contradictions in Emil Nolde’s biography. It has long been known that in 1934 Emil Nolde, as a Danish citizen, became a member of the ‘National Socialist (Nazi) Association of Northern Schleswig’ (NSAN). New, however, is that Emil Nolde, even though he was ostracized as a “degenerate” artist from 1937 on and was barred from his profession in 1941, remained a supporter of the Nazi regime until the collapse of the Third Reich. This has been established by the first results of an historical study, supported by the Nolde Foundation, into Emil Nolde’s ties with Nazism. This study points out the Foundation’s insufficient educational work in past decades. Not until 2013 did then-new director Dr. Christian Ring begin to open up the archive in Seebüll.

The Foundation sees itself obligated to clear up misconceptions about Emil Nolde as a person that have arisen in the past, as a phenomenon of psychological repression in post-war Germany. Furthermore, these new insights and conclusions are to be considered in the scholarly reappraisal of the extensive works of one of the truly most famous German Expressionists.

The Board of Trustees includes: