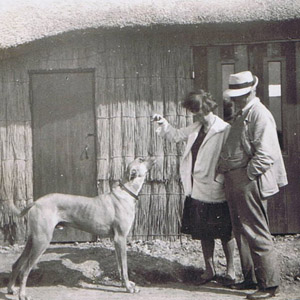 In the thatched garden house, which Nolde lovingly named “Seebüllchen” (Little Seebüll), the painter and his wife often drank tea and enjoyed the floral abundance of their garden. In the year 1930 the first transcript of Nolde’s autobiography was also produced here. At the time Nolde was spending the summer months in Kampen on the Island of Sylt, and sending Ada his hand-written manuscript pages, which she then typed out in “Seebüllchen”. “My Dear”, Ada wrote to Kampen, “in the garden house yesterday I had my first little session with the typewriter … At first your style is somewhat difficult, but later it was ok.”

Today visitors can sit in or in front of Seebüllchen, and like Ada and Emil Nolde in their time, enjoy the view of the garden.

“The summer is beautiful. The summer was sunny and warm. The garden is full of flowers.”
(Emil Nolde)