Emil Nolde’s sunflowers glow with innumerable tones of yellow and orange. In this watercolour he was enthralled by the lush blaze of colour of the sunflower heads, which seem to stand apart from their foliage and the flower bed. They are simply colour: yet despite all abstraction, still unmistakably sunflowers.
Although at the beginning of Nolde’s career he studied the works of Vincent van Gogh who was famous for his sunflowers, only later did he take up the motif himself. In 1926, shortly before moving from Utenwarf to Seebüll, he produced a series of three paintings and a small-format lithograph of this motif. In the print the artist placed the blossoms, drawn from preliminary pastel sketches, in front of a tall cloud formation. He printed the work in experimental colour combinations.
“The sunflowers rise so high”, Nolde reported from the garden in Seebüll to his friend Hans Fehr. From 1928 onward the garden’s magnificent sunflowers inspired him to oil paintings in which he plumbed their spectrum of yellow tones, or contrasted them with the colourful abundance of other blossoms.

At the beginning of his artistic career, Emil Nolde discovered his enjoyment of printmaking techniques. Intending that the “artwork emerge from the material”, he initially began intaglio printing using an unconventional approach. He shared his findings with the Dresden artists of Die Brücke, and in exchange they introduced him to the possibilities of woodcut.
As one of his very first collectors, the print expert Gustav Schiefler acquired a few of Nolde’s prints in the spring of 1906. Thus began his life-long preoccupation with Nolde’s work, and a close friendship between collector and artist. Schiefler produced a two-volume catalogue raisonné of the artist’s prints. Nolde made his own woodcuts to serve as book decoration for its layout. Only the 1921 Nolde monograph by museum director Max Sauerlandt, with whom the artist had been friends since 1913, received equal consideration in the form of book decoration for its title page.
Nolde’s friendship with both of these supporters also manifested itself as portraits of them in prints, watercolours and paintings.

“I sit at every printing plate and work on it as long as it takes until my feelings are satisfied”, Emil Nolde declared to Gustav Schiefler. For his intaglio prints he used the technique of acid etching, in which the motif is etched into the metal. He combined these with drypoint etching, which is done directly on the plate. He used knives, shards and wire brushes to work copper and iron plates, and even worked the etching resist with his bare fingers. With the help of the acid bath, Nolde was able to produce planar structures that offset the emphasis on line in the prints.
In his woodcuts he allowed the “various delightful wood grains and sometimes the knotholes to contribute to the print”. Thereby Nolde softened the hard contrasts between light and dark by breaking up the planes and lines. Inspired by the artists of Die Brücke, Nolde made his own press on which Ada printed the woodcuts.
Nolde made figurative imagery the main focus of his prints. In two small notebooks he kept meticulous records of his printmaking production, which primarily extended through the 1910s and 1920s. It continued to echo in the linear qualities of his watercolours of the 1930s and 1940s.
In the exhibition you can see prints from all the displayed plates.

Although public print collections were long-time sceptics of Emil Nolde’s unconventional printmaking techniques, these techniques delighted Gustav Schiefler. Nolde experimented with etching metal printing plates and with the grain of wooden printing blocks, to achieve unconventional tonalities and colour gradations.
Lithography proved to be a particularly fruitful experimental field for Nolde. From 1907 to 1915 he occupied himself intensely with lithographic printing: “Only when the painter himself works creatively on the stone, does he experience the allure of the technique, and the most extensive possibilities.”
The lithograph “Young Couple”, which he created in a Flensburg printing workshop in 1913, is a rich experiment in colour. “Colours were prescribed, rubbed in, and I stood incessantly drawing, etching, sanding, mixing, calculating, switching back and forth in colours and colours and pulling the large images from the press, almost all of them in the most varied of nuances and states.” In a serial process he reworked the basic motif, drawn in black, into over 60 colour combinations, printing only a few copies of each combination.
In 1926 Nolde continued his lithographic colour experiments in a concentrated series of twenty large- and small-format prints.

Even as a child Jolanthe Erdmann, born October 9th 1921, visited Seebüll often, since her parents, the composer Eduard Erdmann and his wife Irene, were friends of Emil and Ada Nolde. After Ada’s death in 1947, Jolanthe came back into the artist’s life, and the couple married the following year. As Emil Nolde’s late love, Jolanthe played a significant role in the final years of his life. After his death in 1956 she moved away from Seebüll, to allow the house to be opened as a museum. Until her death in 2010 she supported the development of the Foundation.
In his will the artist left twenty paintings, as a representative cross-section of his work, to his second wife. In 2015 the Nolde Foundation Seebüll successfully acquired one of these, the splendid “Still Life with Striped Goat”. In addition, Jolanthe was allowed to select watercolours and prints from Nolde’s holdings. The exhibited works correspond to those which Jolanthe chose. 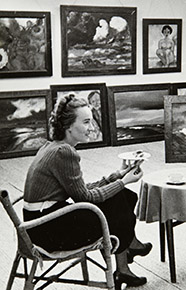 Cabinet 6
Which came First? – Close interrelationships between paintings and prints

“I even allowed some of my paintings to come forth as intaglio prints”, wrote Emil Nolde to his friend Hans Fehr regarding the selection of motifs for his prints. Particularly at the beginning of his printmaking production he referred back to his own, sometimes older, works. They appear back-to-front on the page, but in terms of motif are largely true to their models. When he extracted pictorial elements from his paintings for use in his prints, you can see his freer handling of the prototype image. In one such variation Nolde uses the striking motif of waves. Conversely the prints could serve as prototypes for other techniques, as shown by the “Madonna” mosaic. His images of windmills illustrate how subtle changes in the framing or colour harmonies of a motif influenced his translation of it into oil, watercolour, or lithography.
The reuse of motifs fluctuates from faithful mirror-image translation, through variation and free association in Nolde’s painting and printmaking, as these trade inspirations and colour harmonies back and forth.

Menu Title
We use cookies to ensure that we give you the best experience on our website. If you continue to use this site we will assume that you are happy with it.Ok